Globalization And The Manufacturing Age

Globalization was the last thing on the minds of the Japanese, when after the war, they struggled to establish an economic foothold. From this primordial soup of chaos, highly-motivated, creative people formed new businesses which by embracing change, evolved quickly and grew into deep-rooted institutions.After the instability had cooled, company leaders found themselves in command-style leadership roles with steep hierarchical structures.

Hierarchical leaders can quickly transmit tasks which in turn can be easily performed by low-skilled employees. All things being equal, these hierarchical structures are stable and predictable.  But things are no longer equal, and the playing field and rules have dramatically shifted over the past fifteen years—the last five years being vastly different than the previous ten.

Stable and predictable systems are the enemy of creative and innovated systems. Creativity and innovation are what is most needed to overcome the problems of globalization.

One such problem Japanese companies are facing is that the demands of the customers are ever increasing. Lower barriers to entry, thanks in part to technological advances, allow competition to encroach on shrinking markets. All the while, customers expect to pay less for the same goods and services.

Companies feeling the impact of this unwinnable war may be tempted to offer up their employees as the first line of defense.  With record high cases of karoshi (death from overwork), Japan cannot sustain its economic output if it continues to practice a strictly hierarchical model of business.

Natural selection in a global landscape favors a creative, knowledge-worker model.  Japanese companies that want to thrive in the new world economy will have to let go of the old practice of hiring cheap, low-skilled employees, and its tendency to spread its existing workforce impossibly thin.

Also, forward-thinking mature companies will need to embrace risk and the discomfort that comes with change.

THE CURIOUS CASE OF NAKA AND SOTO

Anyone familiar with business in Japan knows about the inside and outside (naka and soto) world of the Japanese culture. In spite of the fact that post-war Japan has opened its doors wider to the world than ever before, signs that old guards remain are easy to find.  Whether born of Japan’s collectivistic nature, or its long history of isolationism, there is an indirect consequence of Japan’s naka mentality.

Systems that are isolated or consolidate inwardly create hierarchical, authoritative structures. In other words, the more isolated, internalized or homogenous a system becomes, the steeper the column of an authoritative hierarchy will become.

Highly-centralized hierarchical systems work well in a  manufacturing-dominated, or a militaristic world.  In these structures the tasks are clear, the goals are finite, and the decisions are linear.  But the world we live in is rapidly becoming creative-dominated, where decisions, goals, and the actions required can change in an instant.

Ultimately, low-skilled employees hired into these monolithic structures resemble cogs in a massive and slow-moving corporate machine. Hierarchy demands that new hires are brought in at the lowest levels and that they fill wooden pre-defined roles.

Rarely do these employees have an opportunity to offer a real contribution based on education and experience. Compare this to non-isolated systems in which employees are hired based on skills at all levels, and shifted to wherever they can bring the most value to the company.

GLOBALIZATION AND THE CREATIVE CLASS OF KNOWLEGE WORKERS

Sometimes referred to as knowledge workers, the creative class workers earn more money on average, are more individually expressive and find value in meritocracy.  These high-skilled workers are increasingly sought after particularly because of their ability to solve a variety of complex problems, as well as create new sources of value with the solutions they provide.

Take for instance the case of how Coty, Inc., was able to reinvigorate their supply chain, by making improvements to the Supply Chain Leadership Team.

Instead of blindly hiring low-skilled workers to fill a tasked role, they opened the positions up to be led by passionate volunteers who were selected based on merit.   The results were immediately measurable: new revenues, reduced costs, increased productivity, and enhanced quality.

THE GOOD AND BAD NEWS FOUND IN THE GLOBAL CREATIVITY INDEX

The Global Creativity Index (GCI) measures most of the producing countries of the world and scores a value based on their level of creativity.  The GCI is a broad-based thermometer for economic growth and sustainable prosperity.   It ranks 139 nations worldwide, on the 3Ts of economic development—talent, technology and tolerance.

The 2015 Global Creativity Index shows that Japan is improving its creative standing overall from 30th place in 2010 to 24th place in 2015.  A closer examination of Japan’s place within the 3Ts shows where companies can make improvements.

So far so good.  So where’s the problem?

The future global success of Japanese businesses will rest on the shoulders of new kinds of leaders.  Whereas hierarchical leaders practice a command style, creative class
leaders will rely on direction and guidance.  And above all, these fringe leaders will need to empower those who report to them by giving them opportunities to grow and improve.

First, companies with an eye toward globalization must break the dependence on low-skilled, low-cost workers and institute better hiring practices.  Skilled employees earn their worth for businesses many times over what they cost.

Second, these companies must actively train their existing workforce and prepare them to take on new challenges.  Anyone, and I do mean anyone, can improve their ability to solve problems.  But first, they must feel that the company, not only supports and encourages their improvement, but has a vested interest in it. 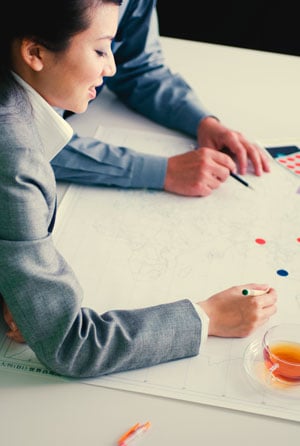 Finally, global companies must embrace risk and take chances.  But many of these risks can be mitigated.  For example, in an idea put forth by Sunnie Giles, leaders wanting to empower their direct reports can use controlled experiments similar to A/B testing.

Testing zones provide employees with a “safe zone” where they, with their managers, can learn from mistakes and make improvements moving forward.   Another way for companies to reduce the impact of risk is to create new teams where only the best volunteers are selected to offer solutions to the company’s greatest challenges.

Japan’s journey toward globalization is undoubtedly an uphill one. It goes against the grain of what many Japanese find natural and functional.  But it is a necessary journey and one that Japan must commit if it wants to remain competitive in a global market.

An exploration into the problems facing Japan as it strives to become a global competitor.